Researchers at the University of California, Davis Medical Center recently reported that adults who added apples and apple juice to their diet reduced an important marker for heart disease in only a few weeks. The UC-Davis study showed that daily consumption of two apples or 12 ounces of apple juice reduced oxidation of the "bad" low-density lipoproteins (LDL) in healthy men and women. The UC-Davis researchers note that their findings in this clinical study are similar to previously-published studies on tea and red wine that reported a similar reduction of oxidation


One apple provides as much dietary fiber as a bowl of bran cereal. That's equal to one fifth of the recommended daily intake of fiber

An apple a day can keep breast cancer away, according to a study in rats by food scientists. Cornell University has conducted the first-ever study on the direct effects of apples on breast cancer prevention in animals. In this study, led by Dr. Rui Hai Liu, Cornell Associate Professor of Food Science, the more apples consumed, the greater reduction in the incidence and number of breast cancer tumors. They found that tumor incidence was reduced by 17,39, and 44 percent in rats fed the human equivalence of one, three or six apples a day, respectfully over 24 weeks.

Cornell University food scientists have discovered that substances called phytochemicals, found primarily in the skin of New York apples, provide huge anti-oxidant and anti-cancer benefits. In an article in the journal Nature five years ago, Liu and his colleagues credited phytochemicals – antioxidants – in fresh apples with inhibiting human liver and colon cancer cell growth. Antioxidants help prevent cancer by mopping up cell-damaging free radicals and inhibiting the production of reactive substances that could damage normal cells.

“Studies increasingly provide evidence that it is the additive and synergistic effects of the phytochemicals present in fruits and vegetables that are responsible for their potent antioxidant and anticancer activities. Our findings suggest that consumers may gain more significant health benefits by eating more fruits and vegetables and whole grain foods than in consuming expensive dietary supplements, which do not contain the same array of balanced, complex components.” says Liu

A recent medical study of nearly 10,000 men and women in Finland over 26 years showed that those with highest consumption of apples were less than half as likely to develop lung cancer as those who ate few or no apples. The study, published in Fall, 1997 American Journal of Epidemiology focused on flavonoids, a plant compound known to have antioxidant effects. Apples are very rich in a flavonoid called quercetin, especially in comparison to other fruits.

Statistical analyses of the diets studied showed that those who consumed the most flavonoid-rich foods-apples and other fruits, juices, onions 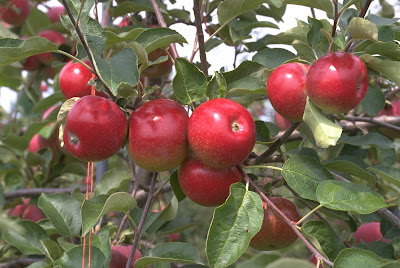 , vegetables and jams-had a 20 percent lower incidence of cancer. Quercetin, a flavonoid found largely in apples, accounted for 95 percent of the flavonoids consumed by the study group.

Empowering you on your path to success!

To encourage and influence your perception and daily habits in a way that promotes a consistently healthy lifestyle through the use of effective communication and a variety of progressive exercises.